Under certain circumstances, for example automated batch processing, Atakama’s Key Shard Server (KSS) can be used instead of a mobile device to approve decryption events. The KSS can be deployed to approve requests based on preconfigured policies that are controlled by the administrator, thereby allowing intended operations to perform file decryptions. The KSS can also be deployed across an organization to allow end users to access encrypted files without the need to perform MofNops on their mobile devices.

The KSS instance and its profile are used to directly support its intended functionality, which is to perform decryptions. The KSS cannot be used to share encrypted files with end users.

Our suggested minimum server requirements for the KSS are 4 cores @2.5 GHz with 8GB RAM. 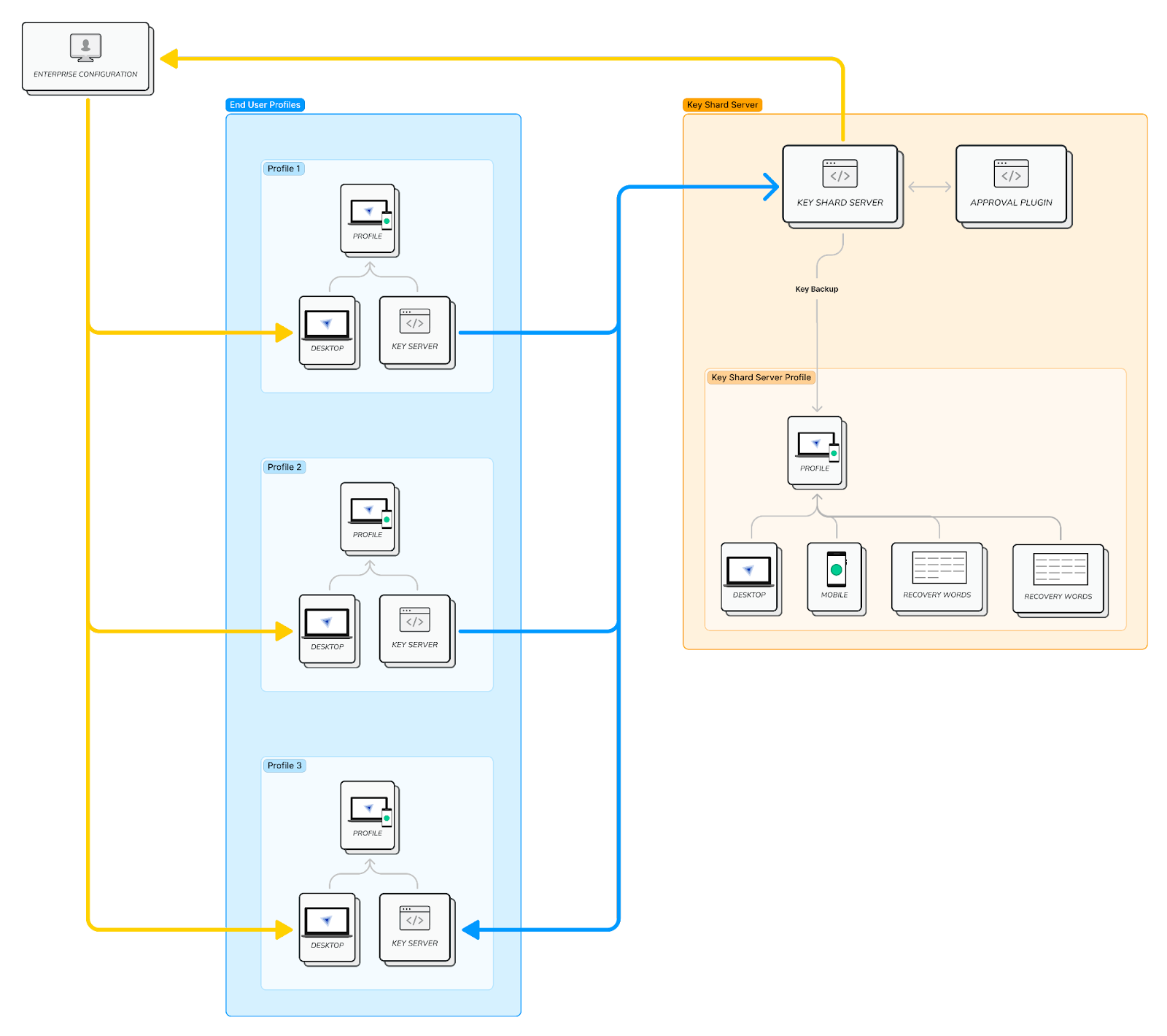 The KSS is controlled via the Command Line Interface (CLI).

Create a Secure Folder where the KSS backup key will be stored. For redundancy, this file should be backed up to other locations. Existing data backup policies should be sufficient.

Define policies in the %localappdata%\Atakama\keyserver.yml file.

Run the following command in cmd or Powershell:

The backup path must be within the Atakama Vault in the Secure Folder intended to secure the KSS backup key.

The setup will require a minimum threshold of three (3) devices required to approve and five (5) total devices as part of the profile unless the --ignore-security-checks flag is passed.

After initialization, the KSS ID should be output onto the screen. This ID is required to onboard users using the KSS.

WARNING: When using a virtualized server, do not save a KSS snapshot as a backup in case the primary KSS goes down. Atakama does not support backwards compatibility in this scenario and it could lead to possible loss of data.

Onboarding with the KSS

There are three options when onboarding end users with the KSS:

With any of these options, onboarding the end user is automatic and without end user involvement. Once onboarded, the end user will have received:

The end user may be prompted to configure additional Secure Folders after the onboarding depending on the enterprise configuration.

Sharing within the KSS environment is similar to sharing when Atakama is deployed without a KSS. User profiles with access to the Secure Folder locations must still be verified and then granted access by the administrator. The KSS does not support granting access to other profiles, so each Secure Folder must contain at least one additional non-KSS profile.

KSS policies consist of a series or combination of rules and rule sets. A KSS policy is defined by a rule tree encoded in YAML (see example here). The rule tree is split into sections by request type. Each request type section contains one or more rule sets (the outer list) that define the approval behavior for that request type. If any of the rule sets evaluate to true, then the request is approved (i.e., the rule sets are OR-ed).

Rules are simple conditions evaluated to either true or false. Rules are the basic building blocks of policies.

Basic rule for approving requests based on file name or file path.

Each rule set contains one or more rules (the inner list). Every rule in a rule set must evaluate to true for that rule set to evaluate to true (i.e., the rules are AND-ed). The type of rule is defined by rule. Other arguments are specific to the rule in question.

For a given request type, rule sets are evaluated in the order specified in the policy. Most organizations would likely prefer to set a more permissive rule set ahead of a more restrictive ones.

The following is a list of request types and provided rules that are not applicable to that request type:

KSS policies can be changed by editing the keyserver.yml file. The changes can be loaded either by restarting Atakama or by using:atakama keyserver policy --reload

For rules with persistent data (e.g., per-profile-throttle-rule), whether the existing data is retained depends on the rule being recognized as the same in the second version of the policy. The default behavior will attempt to do this automatically, but will work as intended only when that rule’s rule_id is manually set.

Use atakama keyserver quota list to view a list of any profiles that are currently being throttled by any rule.

A user can be given a higher quota by adding a rule set specific to that user in the policy (e.g., combining per-profile-throttle-rule and profile-id-rule).

All request responses can be disabled via atakama keyserver disable.

When the KSS is disabled, you must use the atakama keyserver enablecommand (with its typical args) to re-enable it.

To see the status of the KSS and to retrieve its ID, use atakama keyserver status.

In order to enable rapid switchover in the event that the primary KSS fails, you will need to preload the backup key onto a second server instance. Once this is complete, you need only to start the Atakama application on the backup server at the time of switchover.

There can be only one active instance of a KSS with a given ID. If that instance dies and there is no backup server, the one KSS instance must be recovered.

WARNING: Setting up a new KSS without performing recovery initializes a completely new key, requiring all existing users to re-onboard and sharing operations to be repeated.

Once the recovery procedure has been completed, end users who were previously onboarded with the KSS will continue to function uninterrupted and new end users can be onboard with the existing KSS ID.