The Global Identifier is a descriptive name for a Secure Folder that is shared by all users. It is a way to identify a location regardless of its path.

Each Secure Folder is assigned to a Security Group that governs the sharing permissions (i.e., who has access) to the encrypted files saved within the Secure Folder.

Using Atakama's CloudSync feature, you can link a Secure Folder to a cloud provider. All the files within the Secure Folder will be backed up to the cloud location.

Secure Folders can be optionally configured to automatically encrypt files under certain circumstances. For example, if you are running data discovery and classification software (e.g., Microsoft Information Protection) that discovers files and labels them, Atakama reads the labels and automatically encrypts the file the instant it is labeled.

There are two ways to encrypt files:

Files can be encrypted from the context menu (right-click) by tapping on the "Protect with Atakama" option.

Dragging files to the Atakama Vault

Dragging a non-encrypted file into a Secure Folder via the Atakama Vault will cause the file to be instantly encrypted.

.kama files can be opened just like any other file wherever the file may be located.

When directly accessing a .kama file, some programs (e.g., Microsoft Word ) may report the file path as within the Atakama Vault. This is expected behavior.

Considerations when accessing files through the Atakama Vault.

When provisioning a new Secure Folder, there are two layers that determine a user's access to encrypted files:

If a user lacks permission in either of those layers, they will be unable to decrypt files. As such, if a user requires access to encrypted files, they need both NTFS and Atakama permission to do so.

When upgrading to Oystercatcher, you will need to manually update the Security Group verification by clicking the “Update Verification” button in the Secure Folder Configuration window. 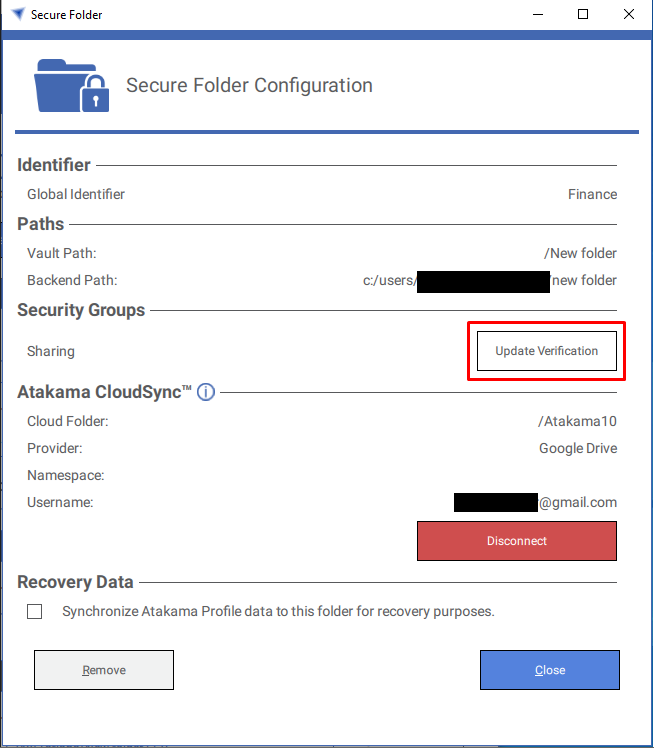